Build it and they will come 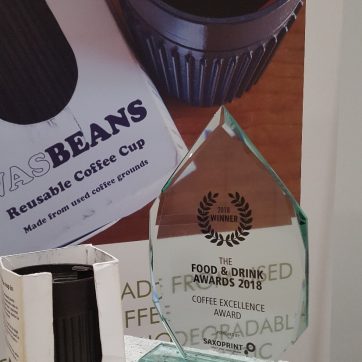 Cambond uses biomass to make an eco-resin for products including wood panels, shipping pallets and bio-plastics. However, the company finds itself competing on cost more than sustainability credentials. Surprise feedstock in the form of algal bloom from Lake Tai, and plastic-averse mothers look set to be the levers that shift the manufacturing value chain in the company’s favour as it makes its first baby plates.

The first problem (to cover) in this story is resin. The industrial resins (adhesives) used to manufacture MDF boards, plywood and moulded products like shipping pallets are typically made of urea, phenol and formaldehyde – harmful, toxic substances. The global market is worth around $35 billion. Resin is a commodity product.

The second problem is unused waste. For example, agriculture generates approximately two billion tons of waste biomass every year, which could be upcycled into other products.

The third problem is one facing many start-ups looking to manufacture. “Build it and they will come!” goes the advice, but this can be difficult. Gareth Roberts, business director, Cambond says: “You can’t raise money to manufacture without a market and you can’t get a market without showing you can manufacture.”

Cambond uses biomass to make an eco-resin for the manufacture of products including wood panels, shipping pallets and bio-plastics. The products are happily manufactured within existing structures and facilities. They perform as well as, if not better, than traditional alternatives and their sustainability credentials are sound – they use waste as a feedstock, reduce consumption of oil-based chemicals and manufacturing’s carbon footprint.

However, the start-up has found it hard to break into the UK market. “Greener alternatives are all very well, but buyers are still acutely sensitive to price,” says Gareth. “They’re only willing to buy environmental products if the margins are there. And starting to manufacture in the UK is difficult[1].”

Cambond turned to China[2]. The company is partnering with manufacturer, Taizhou, to make products using its eco-resin and straw or bamboo. And it’s already made an impact on the local environment.

Agricultural run off generates 200,000 tons of algae/ year on Lake Tai. Using it as a feedstock is of significant benefit as it’s not currently disposed of or upcycled. The local government pays people to come and put it on the side of the lake as it’s not processed enough for feed or fertiliser.

Another surprise feedstock is coffee grounds. In 2018 Cambond won the international Coffee Excellence competition with cups made from upcycled coffee grounds and furniture made from old, disposable coffee cups – proof their technology is adaptable (to different feedstocks).

Cambond is now making 2,000 of the winning coffee cups, along with a line of shipping pallets. The pallets are not only lighter and more sustainable than the traditional alternative, they’re cheaper – a conventional plastic pallet costs more than 50 euros and one made from biomass less than 30.

Another product on the production line is baby ware – Gareth’s research shows there’s a growing demand for plastic-free plates and cups from new mothers. The company hopes these products will be proof enough (of technology, cost and demand) to win large orders in the UK and start manufacturing closer to home.

At time of writing, Cambond makes approximately 4,500 tons of eco-resin a year. That equates to an annual turnover of more than 2.5 million euros. It’s developing a low carbon manufacturing supply chain that, directors Gareth and Xiaobin Zhao hope, will disrupt the global market for industrial resins and usher in an era of more sustainable production.

Cambond is joined the EIT Climate-KIC accelerator programme in 2014. Gareth says: “We’ve had some useful R&D interactions with other companies, talking to people about people – making recommendations for jobs and so on – the network is great.”

[1] The quote continues: “You have to show practical tests that your technology will work with the existing infrastructure and not break it” but repeats the introduction – so only use it with an edit!