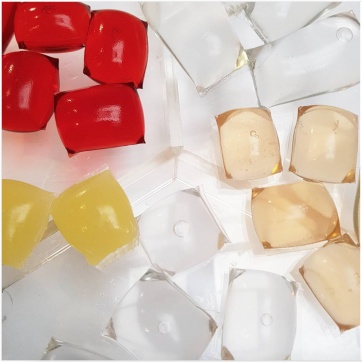 Ooho! sachets are edible, biodegradable bubbles that can be filled with water, drinks and sauces. They’re made of seaweed. Local production and a short-shelf life make them an appealing anti-plastic, zero-waste packaging for companies and consumers at events, festivals and takeaways. Conscience and convenience like that will be significant levers of change for the plastic packaging industry.

Several years ago, Pierre-Yves Paslier worked as a packaging engineer for L’Oréal. He was shocked by the amount of plastic – and in turn, waste – generated every day. Plastic has been the media cause ‘du jour’ for some time – who doesn’t know that it lives forever[1] in landfill if it isn’t busy strangling the ocean?

Producing it is harmful because it comes from petroleum, a non-renewable source, and even recycling can be tricky. It’s hard to break plastic down. When you do, it creates harmful micro-plastic – which can now be found everywhere, from the sea bed to our blood stream. And when it’s recycled, it’s essentially downcycled into products with less value (which makes sense if you know that it’s hard to make clear plastic from recycled plastic).

Pierre-Yves decided to do pursue a more meaningful career path. He left L’Oréal to study innovation and met business partner Rodrigo García González on a masters course in London. They set about making a biodegradable packaging for water and other liquids during their studies in 2014. And they succeeded.

Ooho! is the brainchild of Notpla (previously Skipping Rocks Lab), their London-based start-up. Notpla – short for ‘not plastic’ – is also the name of the material the company invented to replace it. It’s made from seaweed extract.

Runners at the 2019 London Marathon gulped 35,000 Ooho! sachets filled with Lucozade Sport. “You could see satisfaction and smiles on the runners’ faces,” says Rodrigo. “We were in mile 23, which is one of the last stations. Most runners knew we were going to be there and were quite excited about being hydrated without using plastic packaging.”

Ooho! sachets can be eaten but decompose in about six weeks if not. A short shelf-life means they’re targeted at sports events, festivals and takeaways. That’s appealing for companies and consumers who want to see less waste.

Ten takeaway restaurants, part of the Just Eat network, have been trialing sauce packets made from the magic formula since summer 2018. Ninety-seven per cent of their customers, who consumed over 40,000 Ooho! sachets, said they wanted to see them in their next delivery.

The sachets are designed to be produced to be locally. Notpla will lease machines so that its customers can package liquids (such as drinks or sauces) on site, which is more carbon efficient than packaging and transporting them from a production line.

Ooho! sachets at the London marathon replaced 35,000 plastic water bottles. A recent trial in Selfridges food hall saw them replace another 4,000. By combining forecasted impact in retail, festivals, marathons and take-away, they target one million units the end of the year (2019).

Ultimately, Notpla plans to prevent one billion plastic bottles reaching the ocean each year and 300 million kg of CO2 – roughly the amount it takes to produce and transport that many bottles – being emitted.

In the meantime, the company is deploying its technology across a range of packaging solutions, starting with the film that lines disposable coffee cups and cardboard take away boxes.

Where does Climate-KIC fit in?

“Thanks to the support of Climate-KIC we were able to make a student project into a business. We had to make the project a company to join the accelerator. It was a really crucial push for us.

“We learned a lot from our mentors and masterclasses – new topics like negotiating, marketing. It was also lovely to have support and space to work at Imperial College London, which became our home for two years. We were able to access transfer money to have team of scientists working for us there. When we left, our first office was in Barbican and the current one’s in Bethnal Green.”