The UK’s in hot water 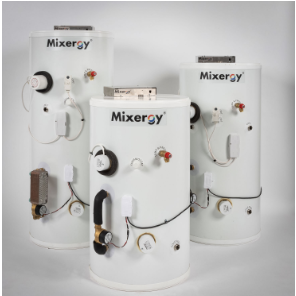 Centrica, the largest installer of heat systems in the UK, made a significant investment in the Oxford-based business in January 2019, putting Mixergy in a great position to deploy its tanks at scale. Market penetration could be a significant lever of change in the way we transition from gas and use alternative technologies and energy to run our homes.

The UK is quite inefficient at heating water at home. Many smaller properties have combi-boilers, which heat water on demand using gas. Larger properties tend to have gas or oil-fired boilers to heat water in a big tank (tanks are often called cylinders).

These tanks take an all or nothing approach to heating water. “You have to wait for all the water to be heated before the target temperature is reached,” says Zara Harper, marketing lead and analyst, Mixergy. “If you wanted a (single) shower in a household with a large tank, you’d have to wait for the whole tank to heat up. That wastes energy and money and can take a long time.

“And some of this hot water temperature can be easily diluted. As soon as you run the hot tap, fresh cold water will rush into the tank to replace it, causing mixing.”

Wasting energy heating water isn’t good for anyone. A 2019 report by the Committee on Climate Change (CCC)[1] said that emissions reductions from the UK’s 29 million homes have stalled, while energy use in homes – which accounts for 14 per cent of total UK emissions – increased between 2016 and 2017. Much of that energy is used to heat air and water.

The CCC has also recommended that no new homes should be connected to the gas grid from 2025 and expresses concern that not all will be as climate friendly as they should. With the UK government committed to building 300,000 new homes a year until the mid-2020s, at the same time as reducing emissions to almost zero, new and old homes face a big challenge: how to heat water without gas and without wasting energy.

Mixergy has created a smart tank designed to heat only the water needed, allowing it to deliver hot water faster and keep it hotter for longer than the traditional equivalent without wasting energy. A patented inlet diffuser minimises hot and cold water mixing inside the tank. The tanks are compatible with solar PV and thermal, meaning some households could heat water for free.

The Internet-connected tanks operate on an integrated Internet of Things (IoT) platform to enable intelligent control over hot water use – scheduling heating to save up to 40 per cent on energy bills and exploit off-peak tariffs.

The market has been quick to recognise these product features. Mixergy will have connected approximately 1,000 tanks by the end of 2019 and is expanding sales to the Netherlands, France and the USA.

The company has also committed to three feasibility projects focused on expanding their capacity to balance the national grid and maximise the use/ production of renewable energy:

Mixergy has the potential to make a huge impact on emissions. The smart water tanks it sells, and feasibility studies it’s doing, are designed to help homes transition from using gas to renewable energies. Some will be motivated by the climate agenda, others the promise of plentiful hot water and lower heating bills.

The company’s focus on providing a low cost, scalable Demand Side Response (DSR) solution speaks directly to the world’s 2050 climate objectives. And it all boils down to something as simple as being opportunistic about when to heat a water tank.

Mixergy is a 2017 accelerator graduate. Pete Armstrong, chief executive officer, Mixergy, says: “The Climate-KIC network is fantastic. I met Graham Oakes, the founder of Upside Energy, back in 2015. We’ve worked together on several projects, including PETE.

“We’re also working on a Balanced Energy Network (BEN) project to use an aquifer in London as an underground thermal energy source. Two 10,000M tanks next two London University Southbank buildings will store waste heat from air conditioners in the summer and then we’ll test the potential of seasonal energy storage.”

[1] Source: UK homes unfit for the challenges of climate change

Cambond uses biomass to make an eco-resin for products...